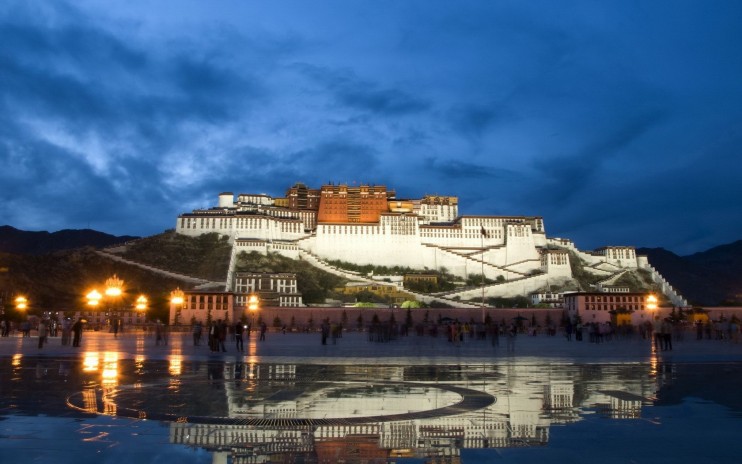 The premiere West Coast readings of

Tibet Does Not Exist

by playwright-screenwriter Don Thompson of NYC (and with a foreword by the Dalai Lama himself and esteemed buddhist scholar Robert Thurman, (father of actress Uma Thurman). The reading was in presented in 2005 on Monday and Tuesday night, May 23 and 24 at 8pm, at Oregon Stage Works located at 185 A Street in Ashland.

The premise of the socially insightful and humorous play “Tibet Does Not Exist” concerns the discoveries and travel of a Tibetan Lama, who is sent to a large U.S. city, where he is then interviewed, bemused and perplexed by an initially unempathetic, high-brow econo-mics university professor and his colleagues and students. By the end of the Tibetan dignitary’s visit, several ‘bridges’ will have formed into a new appreciation of the rich, paradoxical wisdoms that our Eastern distinguished neighbor has to offer our more concretized Western cultural values.

This unique play had been originally performed off-Broadway in 1997 to critical acclaim, with many luminaries in attendance and was originally co-produced by Will Arntz , the mastermind behind the groundbreaking consciousness film, What The Bleep Do We Know, which was directed by our now local resident, the visually gifted Mark Vicente.

Don Thompson, the author of “Tibet’ is also the editor of the upcoming anthology of cutting-edge cinema-essays, entitled “Your Life Is A Movie” on Del Sol Press, and is head of Next Pix Films, (www.nextpix.com), an independent film production company based in New York. Don is the director of the festival-winning film “CLOUDS” about a quantum-physicist who falls in love, which was billed as the precursor to “What The Bleep Do We Know‘, and is also developing the anticipated feature film, THE MESSENGER, based on a true story by noted BBC journalist Isabel Hilton.

The director of the readings is Jon Bono, a partner of the latest local film-production company in Ashland, entitled “Golden Flower Productions‘ which specializes in ‘new consciousness cinema’ themes and projects. Jon, a screenwriter/author was one of the original members of the “Spiritual Cinema Community” begun by producer Stephen Simon(www.spiritualcinemacircle.com )

Jon’s buddhist arts and visualization book “The Healing Mind” has been endorsed by the famed author Arthur C.Clarke (of “2001′ )